Yes, because platforms could be on either side of the train, especially as only the locomotive changes ends and perhaps turns round.
Top

For all the train buffs on here! Here is 'Winnie peg' and friends who have no problems with windows on their train!

Phoenix wrote:If I remember correctly, they were opened and closed by means of a leather strap which, as it had several vertical holes in it, allowed you to adjust the amount of air you wanted to allow in, or the rate at which you wanted the cigarette smoke to escape. When fully closed, the bottom of the window frame sat in a kind of safety channel or slot.

I've just come across a perfect example in an issue of The Wizard in 1961 of what I was trying to describe above. The story is from a series on trainspotting.

I recently got a Jack and Jill 1961 and I love the centre pages The Children who live in the shoe....very nicely painted and full of busyiness
Peter Gray's comics blog
http://www.petergraycartoonsandcomics.blogspot.com
Top

Peter Gray wrote:I recently got a Jack and Jill 1961 and I love the centre pages The Children who live in the shoe....very nicely painted and full of busyiness

And hidden objects, did you find them all?

They are good, such a lot of work with all those characters, it ran for about seven years, followed by a similar title' Our village Cherry Green'.
Top

I'll do a blog post on them..
Peter Gray's comics blog
http://www.petergraycartoonsandcomics.blogspot.com
Top

The popular 'hidden object' puzzles were later incorporated into the Jack & Jill cover feature in the early 1970s: 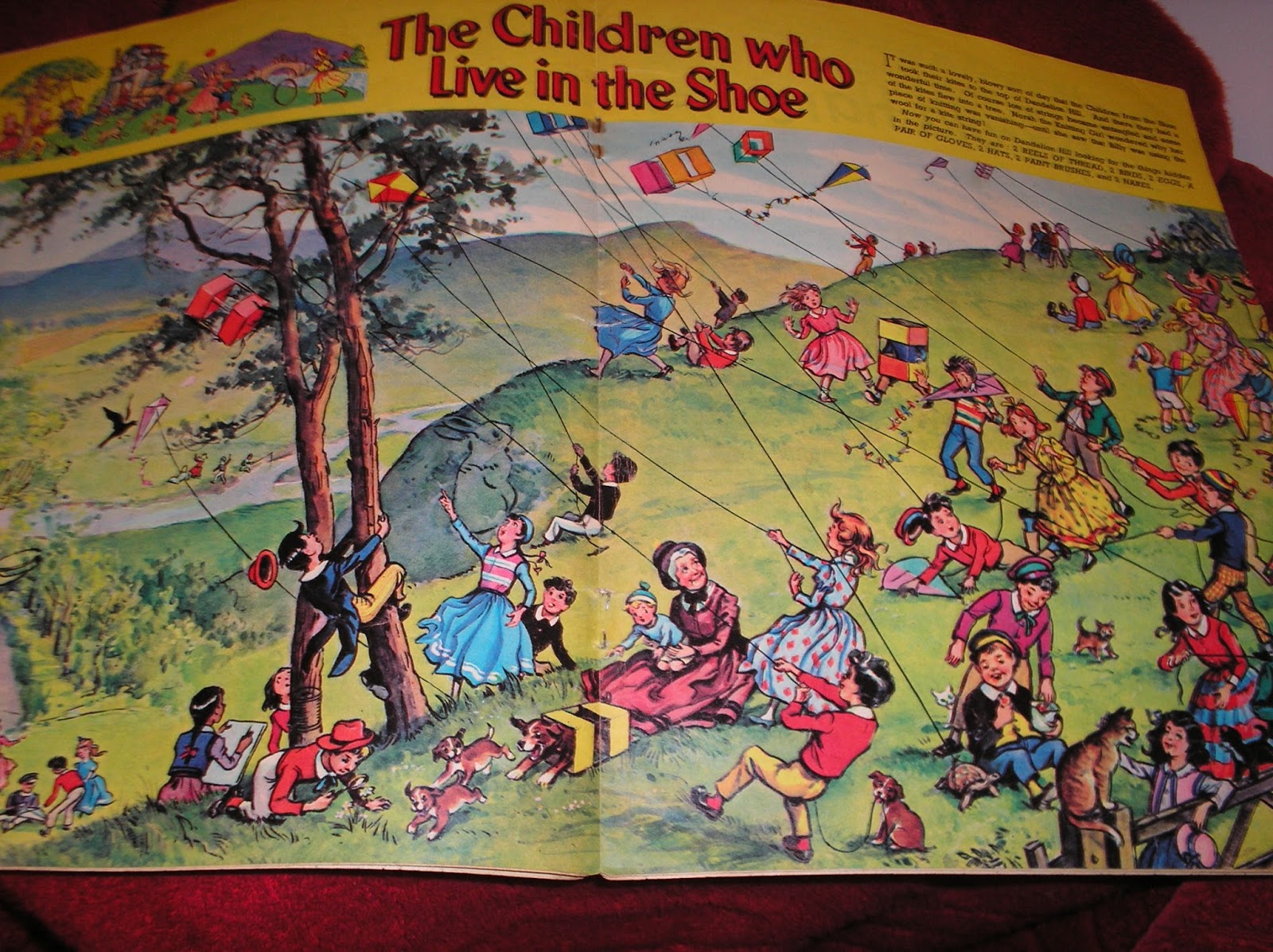 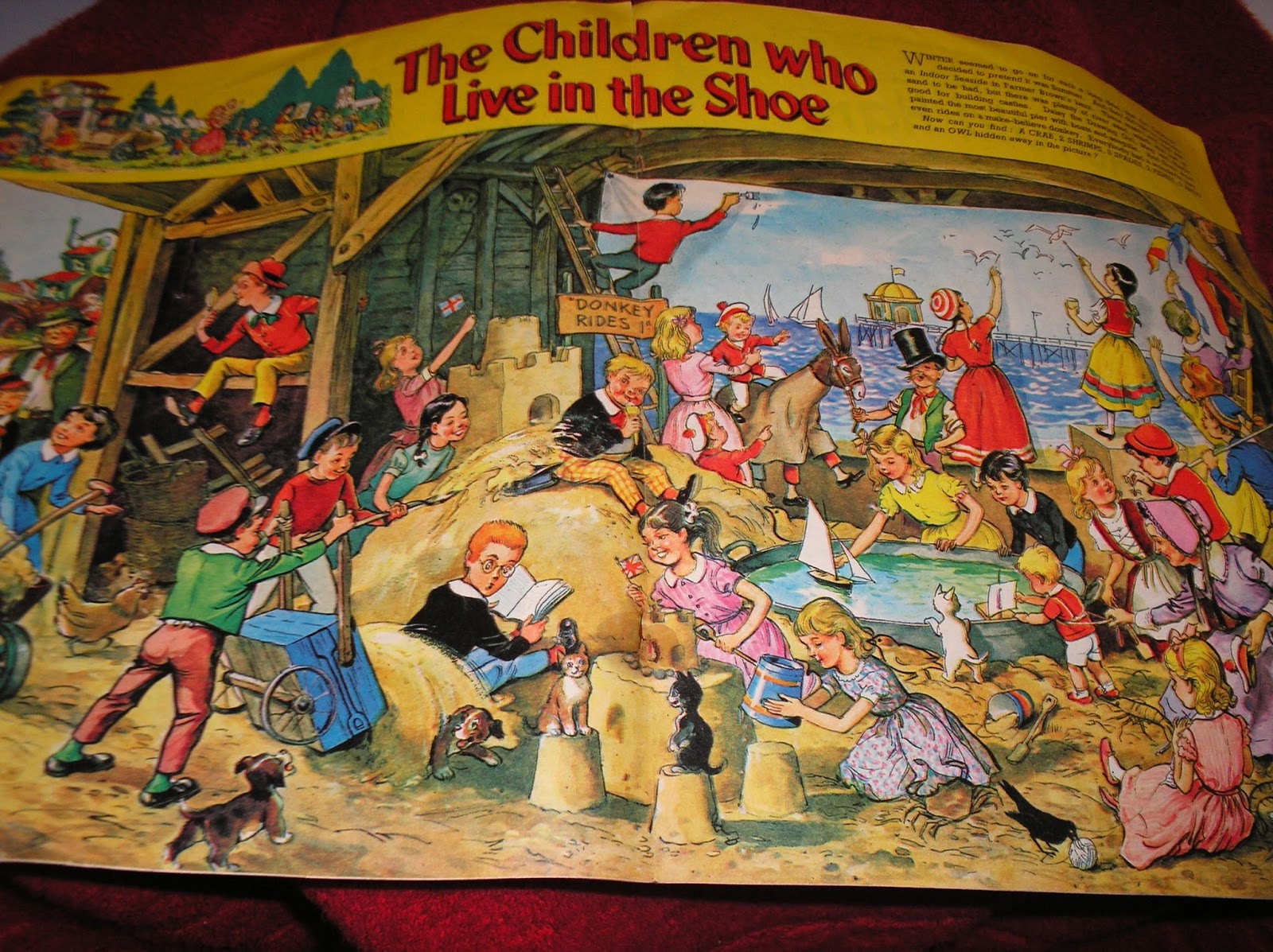 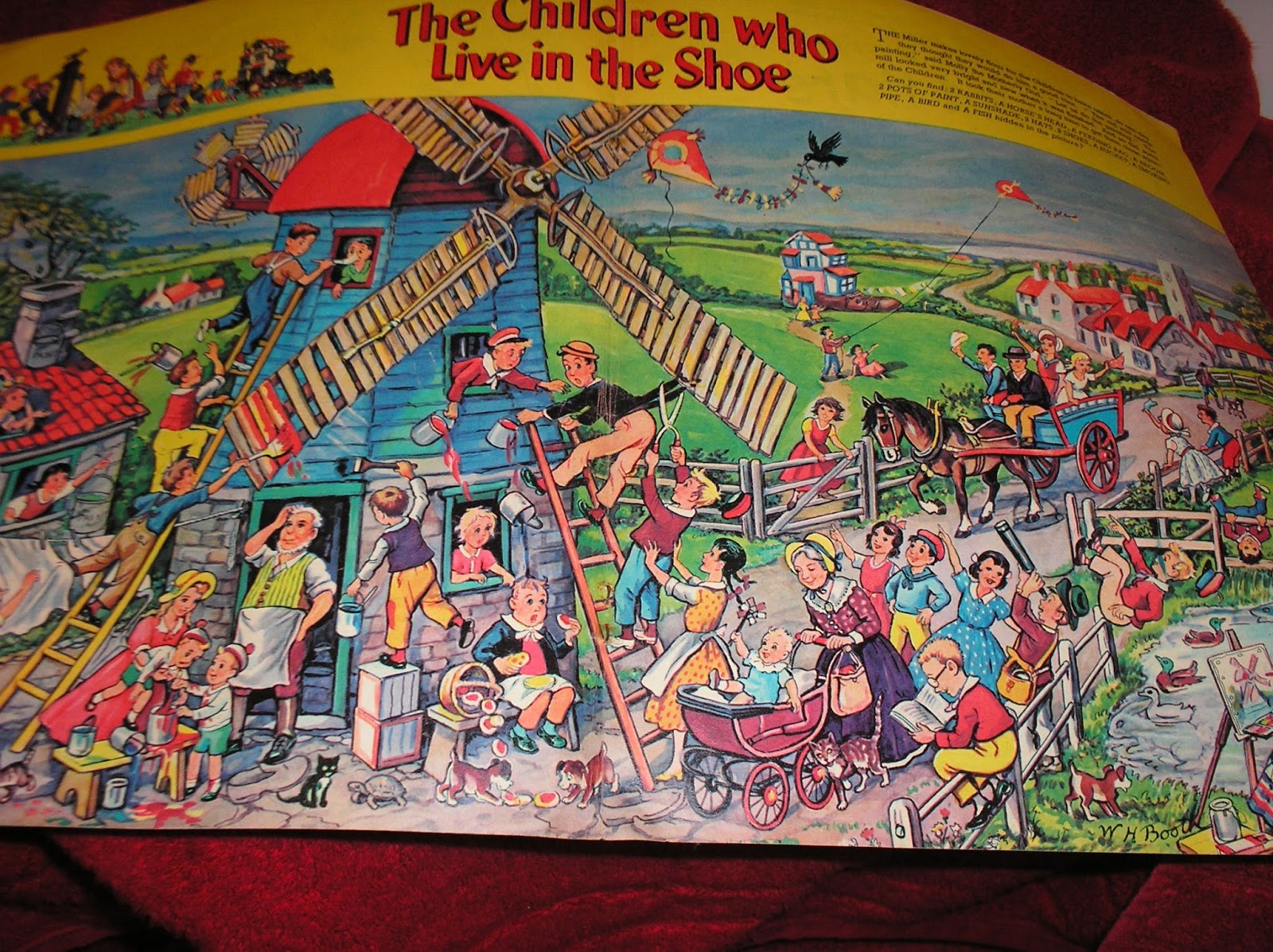 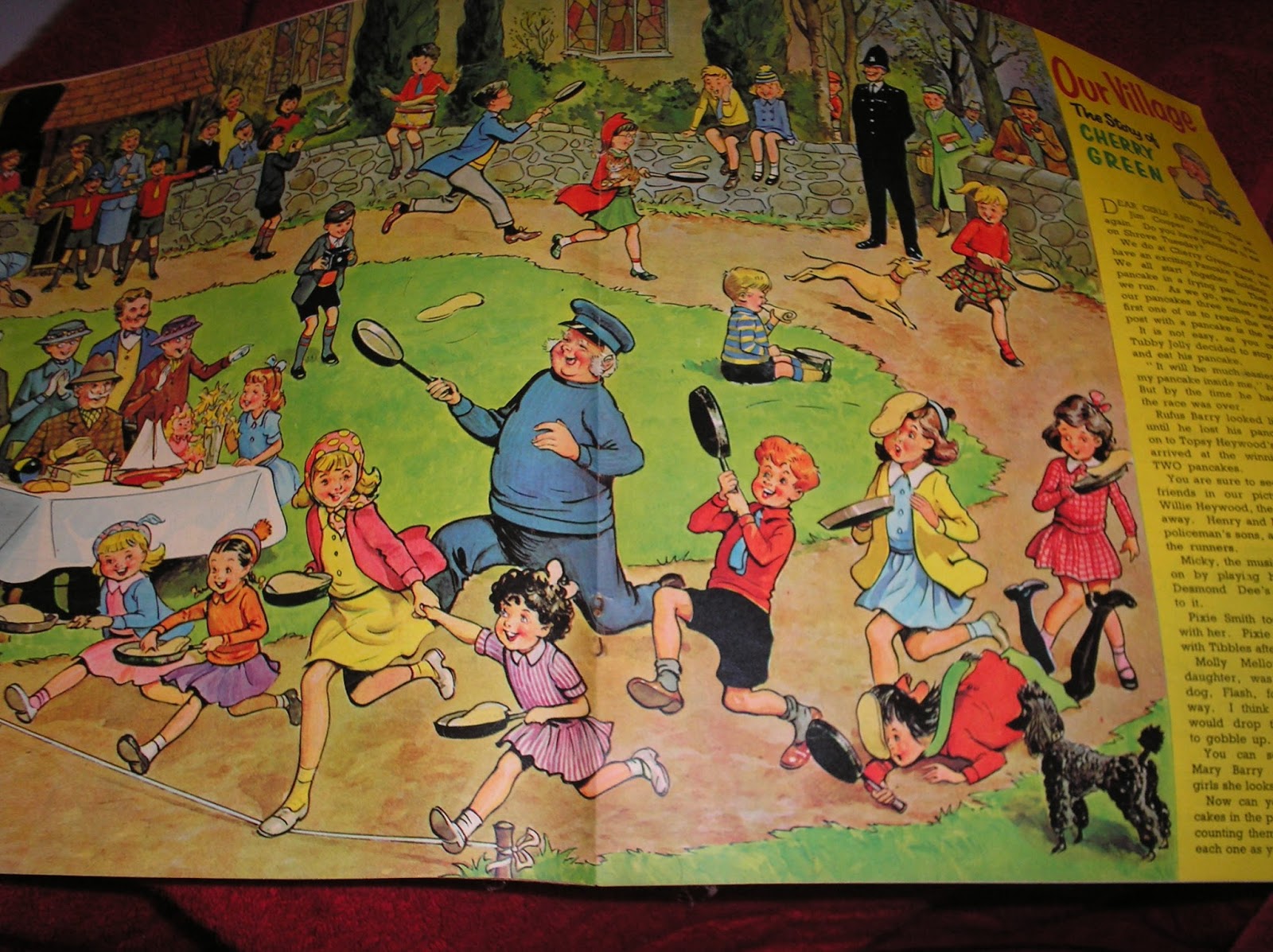 From what I remember, readers could have just as much fun looking at the many fascinating details that weren't hidden as the ones that were. Also, one could spend ages hunting for regular characters - like the brainy kid with glasses. To my mind Arnold was the best of the rotating artists, often producing scenes that could rival even Alfred Bestall's famous Rupert endpapers in their colour and movement. It really is amazing that he was able to turn out work of such quality on a regular basis! theres the girl artist...the boy whose always eating the two twins...also love the period details...as you say it is amazing how quick they did it..that teapot in the fire is very clever...
Also the puppys and kittens are great fun..
When did this centre page feature start..1960? and what was the centre pages before?
Peter Gray's comics blog
http://www.petergraycartoonsandcomics.blogspot.com
Top

Peter Gray wrote:When did this centre page feature start..1960? and what was the centre pages before?

'There was an old women who lived in a shoe' ran from I believe the first issue in 1954 until January 30th 1960.
It was then replaced by 'Harold Hare' in colour, that ran until about early June 1960? Then the title was changed to 'The children who live in the shoe' which ran until 1961 when by October 1961 'The story of our village cherry green' took over, then by early 1966 the title had changed again to 'The story of cherry green'.
In 1967 'Fliptail the otter' took over that ran until late 1969 early1970 when reprints were in the centre, then, when 'Teddy Bear' joined in the mid seventies they became the centre spread.

Hope that helps? If anyone can add anything that would be good!

The scan is of the first 'Harold Hare' in colour. Please excuse that, having a few problems!

Those 'Out and about with uncle Ben' are also very good.

Speaking of centre spreads, I forgot I had this 'Jack and Jill' that I picked up a while ago, it still has the flyer for 'TV Toyland 2' stapled in the middle. How common is that?

The Old Woman Who Lived in a Shoe also appeared in the centre of Harold Hare for a time, shortly before that comic was swallowed by Playhour.

For the record there seems to have been a third, unnamed artist who took turns on the feature when it appeared in Jack & Jill. Though his coloured line drawings might not have been quite as impressive as the full-blown paintings produced by Arnold and Booth I suspect that some children might have actually preferred their clarity. Here's a nice example from August 1957: Actually I'm amazed that some enterprising illustrator hasn't since tried to interest publishers in a book full of similar crowd scenes - albeit drawn in a slightly more modern style. Compared to the hugely successful 'Where's Wally' it seems to me that, with or without the 'hidden objects', each one of these pictures is capable of providing children with the same sort of pleasure many times over: thus, once they've found the 'brainy kid with glasses', they can immediately start searching for the 'tortoise', or the 'little twins' or the 'blackbird', etc. All that's really needed is an opening sequence in which the entire cast of characters is introduced to the reader.

Come to think of it I bet Mr Stringer would be brilliant at this sort of thing. How about it Lew...?