Formerly known as Classics from the Comics, this forum covers all of DCT's retired titles, like Beezer, Topper, Victor, Nutty and Sparky!

For a strip to be included in this list it must have appeared at least 100 times (reprints included) in any of the following publications.
The Topper 1953-1990 (1963 issues)
The Beezer 1956-1990 (1809 issues)
Beezer and Topper 1990-1993 (153 issues)
Using these criteria it actually transpires that, in total, 117 strips qualify for inclusion
so rather than disregarding the strips placed 101-117 I've decided to also give them an honorable mention as they so very nearly made the grade.
For anyone who knows the history of these comics at all I don't think the Top Ten and certainly the Top Five will provide any shocks but hopefully there will still be a few surprises on the way.
I also make no bones about the fact that I may write more about some strips than others simply because some strips have interested me and continue to interest me more than others. Artists listed will usually be the first who drew a particular strip, supplemented with others if they subsequently provided significant input. I also hasten to add that as this is a sort of 'work in progress' the actual listings may take some time. So I beg your indulgence in this regard.
More anon.
Top

Once this gets going I'll advertise this forum topic on my blog..

Incidentally, I assume this will be based on the number of separate appearances rather than total pages - otherwise all those three-page Nick Kelly stories would boost his rating considerably.

Fun trivia: Roger the Dodger is in the first merged Beezer and Topper, in the Kelly the Defective Detective strip. I know that Cedric was replaced by a young boy, but was there any other reason for Send for Kelly to be renamed when the comics merged?
Beano and Dandy Comic Libraries and Fun-Sizes list

Incidentally, I assume this will be based on the number of separate appearances rather than total pages - otherwise all those three-page Nick Kelly stories would boost his rating considerably.

A fair point Phil. So just to clarify, an appearance of a character in a particular issue whether in a strip of 1, 2 or 3 pages would each only qualify as a single appearance with regard to the count.
Now to get started with the first of the two titles that tied at No 116.

116= The Amazing Peet from Planet K (Topper) (1973-1974) (1982-1983)
Art - Paddy Brennan
Klutonian (Ordinary Class) Peet is found guilty of raiding King Klute's royal fruitorium
and, as a punishment, is banished to the 'primitive' planet Earth for one year where, as part of his sentence, he must obey all earthling instructions to the letter. A literalism that gets him and his young Earth pal Stan Stenson into all sorts of trouble.
This strip ran for a total of 51 weeks and appears here thanks to the full reprint of the series, in the then A4 reduced size Topper, a decade after its first publication giving it a run of 102 weeks in total.
A piece of masterly work by Paddy Brennan who, over twenty years earlier, had been responsible for the appearance of the first bizarre alien to visit Earth ( discounting Jack Flash) via a Thomson comic, the Dandy's 'Willie Willikins' Pobble'
More anon.
Top

I like the storyline in The Amazing Peet when the Dad becomes a boy again and gets into loads of trouble..as you say Paddy's work is amazing!!
Peter Gray's comics blog
http://www.petergraycartoonsandcomics.blogspot.com
Top

i dont think reprints should count full or otherwise it should be original apperances reguardless of number of pages etc,that 1st story in the poll had 51 original apperances but there may be stories that had say 60 apperances which rightfully puts them ahead.But i do want to see this poll however it is done

I would've thought the ones that got reprinted were popular first time around, and that's why they get reprinted. For recent examples, take a look at the Beano. Calamity James is reprinted... it is quite popular, but artist Tom Paterson is too busy to do new material. Then there's Little Plum, another popular character who keeps coming back. His current run is also reprints. And Fred's Bed launched in Beezer and Topper #1. It was so popular when Beano reprinted it that they ran out of stories to reprint, and had to start making new ones! I think it only ended originally because Beezer and Topper did.

So reprints can be a gauge of a strip's popularity, and I think that justifies their inclusion in Kashgar's list.
Beano and Dandy Comic Libraries and Fun-Sizes list

It's my list so I'll include reprints if I want to! Seriously though, if a strip has appeared 102 times in Topper, even if half of those apppearances are reprint as is the case with 'The Amazing Peet', then to my mind the overriding criteria for inclusion is still those 102 appearances, however they may be made up.
It is true that some strips, truly classic ones in some instances eg Wild Young Dirky by Dudley Watkins, end up not being included using this method even though they managed several series and over 80 original appearances. But in the end anyone reading the Topper at any point in its history, while only having 80 chances to read a Wild Young Dirky strip had, by the same token, 102 chances to stumble across a strip featuring Amazing Peet. So Peet gets included and Dirky doesn't.
Top

Now, back to the list and tieing with Peet we have -

116= The Barkers (Beezer) (1972-1974)
Art - Watson Kennedy
The story of two dogs. One small, named Nipper, and one large, named Gruff.
What little dog Nipper tried to achieve with his doggy enthusiasm big dog Gruff seemed to achieve more readily with his brand of lazy, canine disdain.

114= Roly Poly (Beezer) (1967-1969)
Art - Bill Hill
A cook guaranteed to spoil the broth on his own but whose gastronomic disasters still had a habit of coming good in the end.
Not to be confused with the food snaffling eskimo from the Dandy 'Roly-Poly Joe' (1957-1960)

Digifiend wrote:I would've thought the ones that got reprinted were popular first time around, and that's why they get reprinted. For recent examples, take a look at the Beano. Calamity James is reprinted... it is quite popular, but artist Tom Paterson is too busy to do new material. Then there's Little Plum, another popular character who keeps coming back. His current run is also reprints. And Fred's Bed launched in Beezer and Topper #1. It was so popular when Beano reprinted it that they ran out of stories to reprint, and had to start making new ones! I think it only ended originally because Beezer and Topper did.

So reprints can be a gauge of a strip's popularity, and I think that justifies their inclusion in Kashgar's list.

I'd add The Three Bears to your list. After a trial for a few weeks in the Beano in 1959, they became regulars from 1960-1985, first by Leo Baxendale then Bob McGrath, when they were dropped (the original runs of the Beano's 'Western' themed strips all ended around the time Euan Kerr became editor - Baby Face Finlayson continued to appear after then, but he was one of Euan's favourites and the western theme wasn't used in the second series in the 1980s). They appeared again a few times between 1989-1993 I think (by Bob Dewar and Bob Nixon IIRC), before reappearing regularly in the mid-1990s drawn by David Parkins. Then they disappeared again before they were brought back in the 1999-2000 vote, this time by Mike Pearse, which they won - they survived three years or so before being dropped once again. They've since returned twice (in late 2006 and since last summer), both times as reprints - first time round they used the Parkins strips, now they're using Pearse's. This seems to suggest they've been quite popular over the years.

Les Pretend as well - he was a regular until the death of John Sherwood, then briefly vanished before reappearing again drawn by Steve Bright then Trevor Metcalfe, before not appearing for some time until the Beano began using Sherwood reprints, followed by Laura's one-off in the comic after which he didn't appear again for close on a year, before they started running more reprints.
'Michael Owen isn't the tallest of players, but his height more than makes up for it' - Mark Lawrenson
Top

Why don't we put a picture up of the character or strips as we go along, so will know who were talking about.
Anybody?
Top 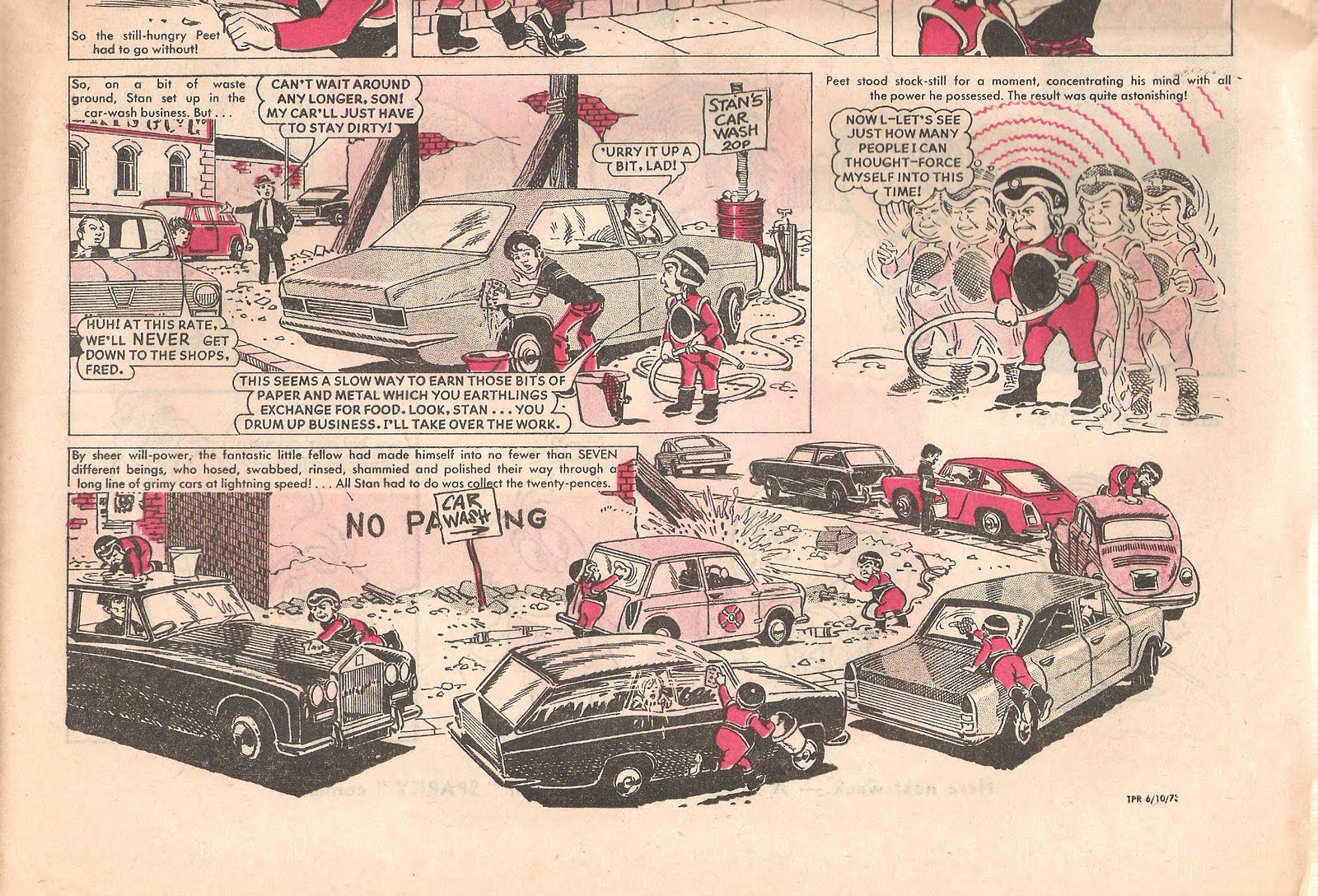 This is actually from Spys scan..thanks Spy..

Is it weird to have no interest in keeping or collecting free gifts?

In the first picture it looks like a red Mini, the pink one is perhaps an Alfa Romeo of some kind, and the grey car being washed looks like a Vauxhall Viva/Victor

In the next panel it looks like a grey Datsun of some kind, the black one might be a Triumph. The red one... i want to say MGB but it looks like something else i've forgotten the name of, maybe also a Triumph. Then there's a pink Beetle, a grey Ford Zodiac/Zephyr mk3, a black Ford Cortina mk3 Estate and a Roller of some kind. Plus what seems to be supposed to be a Mini in the background... with a tudor rose on the door(?)
1910 Press / British Comics Miscellany
Top
Post Reply
148 posts